SOME GLASS IS BETTER TEMPERED THAN OTHERS...

Because it is free, facet-nating, versatile and found in so many places I tend to frequent, I use a fair amount of Tempered Glass — or "TG" — in my work. I have mostly used auto glass salvaged from the auto wrecking yards and am familiar with it's wide range of peculiarities and challenges. It comes in a variety of shades of blue, gray, green and occasionally black. It is many different thicknesses and some brands shatter in different patterns than others. Front windshields tend to be tempered AND laminated, which is not generally conducive to mosaic-making, and it's best to avoid windows with metallic automatic defroster filaments embedded in them unless you plan on making them part of the overall "look" of the finished piece. I can tell you from first hand experience, nipping those filaments out of the glass bits is t-i-m-e consuming. Shower doors are not too hard to find and can give a nice effect depending on what type of surface treatment the glass was originally given as a matter of "privacy decor". A few times I've been lucky enough to end up with someone's fabulous old TG plate glass window: they are clear and nearly colorless, usually break cleanly, are all one thickness and almost always have the advantage of NOT being covered in dirt, grease or soap scum.

Because they were there (being there is half the game) and they were colorless (and colorless is not always easy for me to come by) and they were free (my favorite kind) and I thought they would be fun (fun is the other half of the game), I scavenged a few shelves out abandoned refrigerators in the discarded appliance yard at the recycling center. Part of the fun of using tempered glass, if you are fortunate enough to be getting an entire intact piece (like I had just scored with those shelves), rather than scraping it up off the ground or out of the back seats of junked cars, is the act of breaking it. There is something delicious about setting everything up just the way you want it then ceremoniously and oh-so-gently tapping the side of the glass with a hammer and watching it start to crackle and then spread, with a subtly satisfying little sound, from one side to the other until what was once a solid piece of transparent material with a strong specular reflection develops into randomly shaped and sized gem-like bits of pure sparkling goodness.

However, this is NOT what happened with my refrigerator shelves. I tried tapping them gently, then harder, then even harder — then so hard that they flew across the studio floor and landed, intact, under the big work table. I tried wrapping the whole thing up in a towel, putting it on my concrete studio floor and whacking it with a sledge hammer — the hammer bounced! The harder I hit it with the hammer, the harder the hammer bounced. I was flummoxed, I was fascinated...and I was growing frustrated. I climbed on my table and dropped the shelves. Stil wrapped in the towel, they bounced. I climbed onto the counter (a whole foot higher) and threw the shelves. They bounced and skittered, although one lost a sharp sliver of the corner — and it did NOT resemble safety glass. I gave up at that point, set them aside and began working on the parts of the piece pictured above, PERCH ON A BIRCH, that did not involve TG.

A couple of weeks passed (I am, by nature, slow, and it was a tedious piece!) and then I really needed clear, colorless TG in order to finish that little cardinal's snowy realm. So I got out the refrigerator shelves and considered: a.) trying to use my big, wet scary tile saw on them; b.) put them on the concrete garage floor and run over them with the car; and c.) call my husband. But first I wanted to have one more go. I was going to video the awesome bounce of this TG for posterity's sake — who would believe it? And then I was going to double check to make sure the shelves really were composed of TG and not some sort of modern miracle plasti-glass product. To get warmed up, I wrapped one of the shelves in a towel again, put it on the concrete studio floor, grabbed my sledge hammer, stabilized my cell phone, started the little video camera on it and swung half-heartedly. Suddenly, the glass gave way! I could hear and feel it, and sure enough when I opened the towel, it revealed that the fridge shelves had cracked into REALLY tiny, absolutely separate pieces. No clinging clumps or larger bits to be laid onto the mosaic in interesting patterns, just teensy, tiny, nearly microscopic little pieces fit only for tweezers and magnifying glasses.

As I started to put the bits into their containers, mentally counting the hours I would spend laying those bits down to create the mosaic, I realized that underneath the shelf had been an old wing nut (and what's a good story without a good wing nut?), about the same color gray as the concrete floor, but fairly good sized. I can only surmise that the wing nut, by keeping the shelf from being flat against the floor, provided the extra stress needed to finally fracture the glass. So I did the exact same thing with the other shelf, which for some reason broke into the most beautiful, long thin strands of glass, some up to 3 or 4 inches long and only an 1/8th - 1/4" wide — not necessarily my idea of "safety" glass, but it looks super cool and I'm going to have some fun with those! And the next time I see some lovely, clear, colorless refrigerator shelves gleaming in the sun at the dump, I'm going in for them!
Posted by FRESCA at 2:20 PM

THIS ART IS TRASH!

When I'm not delving into dumpsters or scavenging around salvage yards, I create Mixed-Media Mosaic Art using primarily recycled, salvaged and reclaimed materials — and I love the entire process. The art and craft of making mosaics is totally engrossing to me because it involves the heart in the passion of creation, the head in fitting together all the elements of the puzzle, and the hands in fine craftsmanship. For me, art is both interaction and expression; an exploration of discovery that perfectly weds the mind, the soul and the body in an ongoing, thought-provoking, and always entertaining, dialog...with myself, with the world around me — and with ALL the stuff, both physical and metaphysical, of life — so this blog is simply an outlet for me to share a dose of that dialog and a measure of my musings as I look at, and work with, all the bits and pieces that come my way in life!

Promote your Page too

The Story of Stuff

Stuff...? Yeah, we got LOTS of that! In fact, we're just about stuffed with stuff and this imaginative, informative and cleverly told little on-line tale tells it like it is so that the problem with stuff becomes clear to everybody. It also exlains how easy it is for each one of us to solve our problems with stuff in terms that are so simple and straightforward, you will wonder why you haven't been taking care of stuff already. To watch this short video clip, click on the The Story of Stuff in the Favorite Links section above. And it you like it, pass it on!

WAKE UP AND SMELL THE ALOHA! 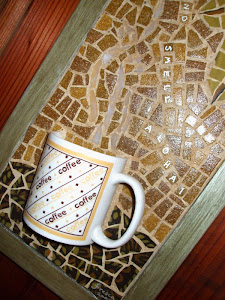 Customized mosaic for my favorite coffee growers at Blair Estate where growing coffee is an art and a lifestyle. Keeping to their organic committment, they use sheep as lawn mowers...once, during a livestock emergency, they actually made me MILK a sheep. Check out their chocolate covered macadamia nuts! Everyone on the mainland begs me to bring them some of these treats — and being the chocolate addict that I am, if I don't pack them away in my suitcase I end up eating them all on the plane. Click on the Coffee Times link in Galleries & Venues above to try some for yourself and take an on-line tour of this unique organic coffee plantation on the island of Kauai.

TRASH IS TREASURE IN PARADISE

Kaua'i Recyling for the Arts is a non-profit art and educational organization created by a group of local Kaua’i artists, educators, business owners and environmentalists. The goals of the collective are to provide art, education and environmental awareness to residents and visitors to the island of Kauai. The collective maintains a studio in Lihue with furnaces fueled by Bio-Diesel where glass bottles diverted from the landfill are used to create art of all kinds. They also offer classes, demonstrations of hot glass work and have a small onsite gallery. It's located between the airport and the dump, so it's definitely one of my favorite places to hang out and so convenient to tourists if you happen to be visiting the island! You can get more info about this worthy organization by clicking on the link in Galleries & Venues above.

FRESCA
I am a semi-retired graphic designer, part-time mixed media mosaic artist, and long-time "trashion-fashionista". All my mosaic artwork is created primarily from reclaimed, recycled and salvaged materials. In addition to my love for art and junk of all kinds, I am passionate about environmental sustainability, travel and recycling. I'm also pretty fond of dumps, salvage yards and thrift stores! I create my art for the pure joy of the creative process and a deep love of working with "old and used" materials. I display my work in a variety of places to demonstrate how potentially useful, beautiful and valuable so much of the stuff that ends up in our landfills really is. Art work that I don't give away to friends, family and non-profit organizations, I sell to support my habit and help promote community and public art projects. My work can be seen in a variety of venues in Vermont and Hawaii, as well as in homes and businesses around the world. I teach mosaic classes, work on public art projects, do some mosaic installations, for homes and businesses, and I do occasionally accept commissions.